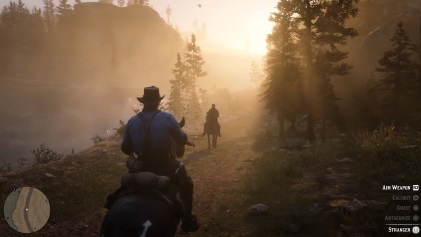 History is one subject that most people hit the snooze button on when it comes up in conversation. But the fact that history is boring is starting to change based on recent trends in video games. Digital developers are starting to see how implementing history in a game design has become a selling point for many franchises. Even this past summer Epic Games included historic figures such as Vikings and Samurais in the popular battle royal game Fortnite.

Obviously World War II has been popular with developers such as Treyarch and EA who put out titles such as Call of Duty and Battlefield. Within the games the player can unlock outfits and weapons that pertain to the time period as well as the side of the war they are playing for (i.e. Allies/Axis powers). Developers are continuing to release World War II themed gamed as the entertainment community patiently awaits the release of Battlefield V at the end of this month.

In more recent news the release of Red Dead Redemption 2 has peaked interest in a time period that is not often recognized in popular culture let alone video games. The game itself takes place during 1899 at the turn of the century. It sets the scene on the heels of the “wild west,” and the end of the frontier era of Westward expansion. It is during this time that towns began to sprout up that are centered around industrial factories and used electricity. It is also during this time where locomotives are the primary means of long distance transport and the developers embedded the importance of railways into the games makeup. The story mode in Red Dead Redemption 2 follows outlaw Arthur Morgan and his gang of outlaws through a Western landscape where industrialization is beginning to phase out the age of the “cowboy.” The game itself is imbedded with historical facts dealing with the American Civil War, Indian rights, prohibition as well as women’s suffrage. Rockstar Games developed a landscape this is completely interactive.

Obviously, the setting of the Red Dead Redemption 2 takes place on a fictitious landscape that is modeled off the American frontier, which does not make the games historic accuracy completely credible. Yet on the other hand, the developers at Rockstar Games created a landscape to showcase elements of this period of time and packaged them in a way that is appealing to a wide variety of gamers. In the first weekend that Red Dead Redemption 2 was released, it set a record with over $725 million dollars in sales making it the largest entertainment release of all time.

With the shear size of Red Dead Redemption 2’s release, it is a safe assumption that history is still something that has a great amount of curbside appeal when it is packaged and presented in an appealing manner.  Overall, when looking at the bigger picture video games hold a valuable importance to the field of history and in a way they serve as a means of historical interaction that only heighten the interest of the players and make history a part of popular culture.